One of the at least five occasions on which St. Oscar Romero cited St. John of the Cross during the three years of his archbishopric was at the funeral of Fr. Octavio Ortiz on January 21, 1979, in which he preached:
the figure of this world passes away and there remains only the joy of having used this world to sow the kingdom of God. All of the pomp, all the triumphs, the selfish capitalism, all the false successes of life will pass away with the figure of the world. All of that passes away; what does not pass away is love, which means using your wealth, your assets, your profession for the service of others; the joy of sharing and feeling ourselves sisters and brothers with all humanity. In the evening of life you will be judged on love!

Published on the «Super Martyrio» blog on December 14, 2018, on the Feast of Saint John of the Cross.

Email ThisBlogThis!Share to TwitterShare to FacebookShare to Pinterest
Labels: English

[ Español ] #Beatification #Canonization Today’s 40th anniversary of the martyrdom of St. Oscar Romero has be... 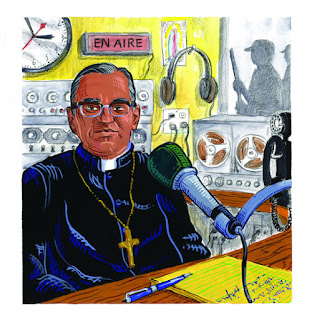